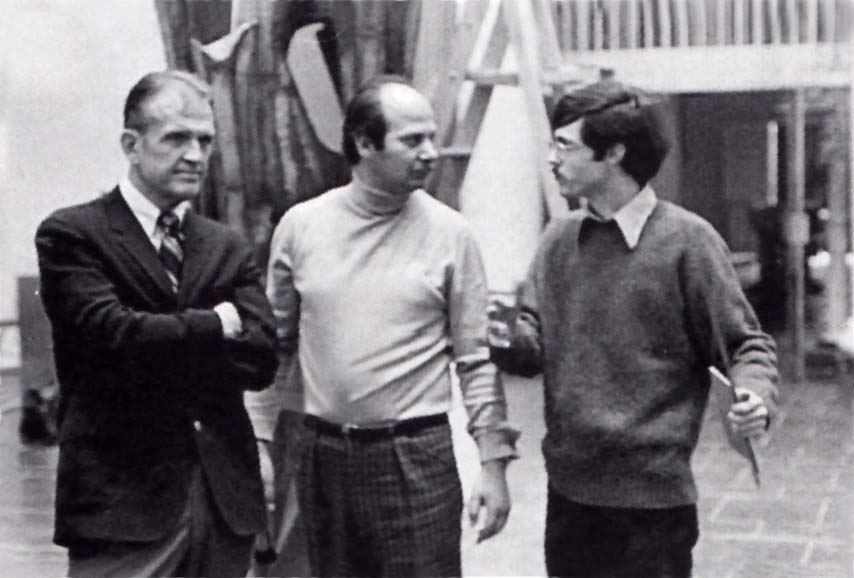 Solo exhibition at the Duke Art Museum, North Carolina, USA. He is invited as a  visiting scholar. He gives lectures and seminars on sculpture at Duke University and at Temple University in Philadelphia. His work is now in the Duke Museum.
Zan Staubo in Oslo acquires two of his works.
He gets to know leading figures among the Greeks of the Hellenic Diaspora, such as Prof. Iosifidis, who organised the Medical School of the University of Crete in the 1980s and Antonis Trakatelis, now Rector of the University of Thessaloniki.
The American poet Elon G. Eidenier is inspired by his work and dedicates his book of poems "Sonnets to Eurydice" to him, illustrated with line drawings by Moustakas and receiving the Pan-American Award (1976). 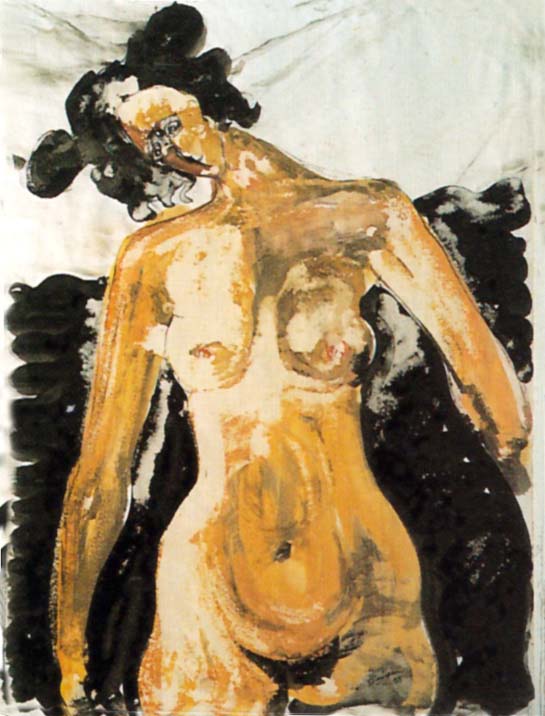 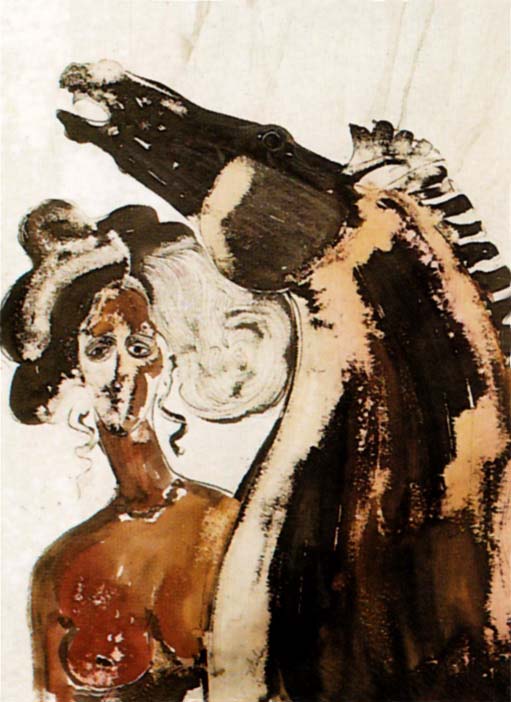 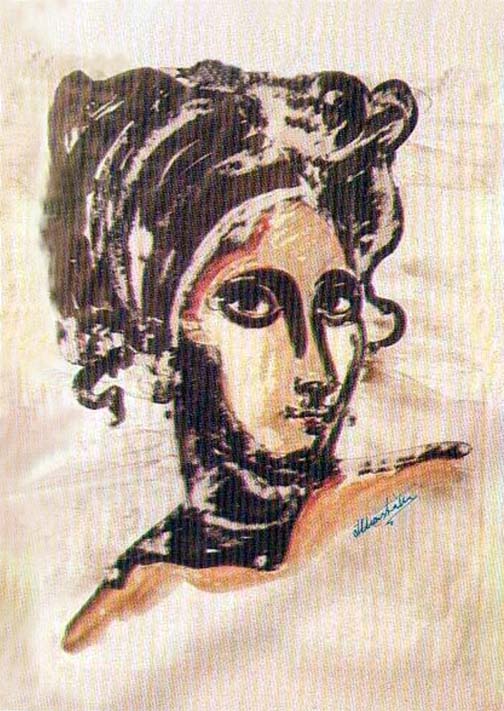 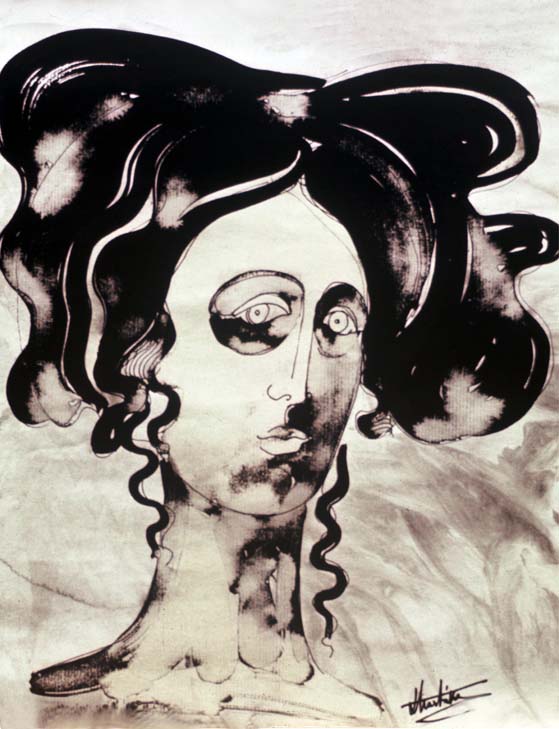 He visits the major museums in New York.

Three days before his return, Zoe gives birth to their third child, Alexandros, in Athens.

He received the first prize for the composition 'Alexander the Great' monument in Thessaloniki. Twenty five Greek sculptors took part in the competition. This was the third competition to be held, the preceding two had not delivered any result. 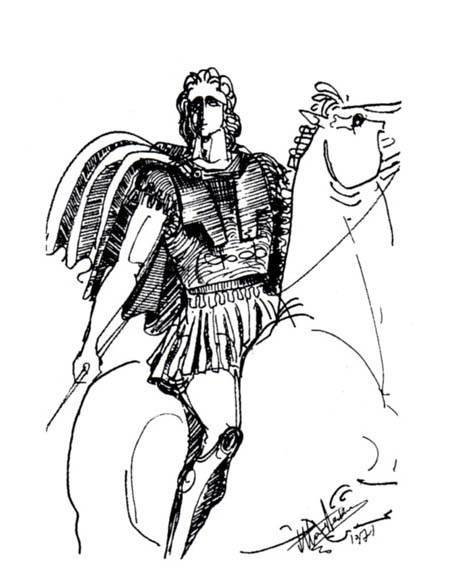 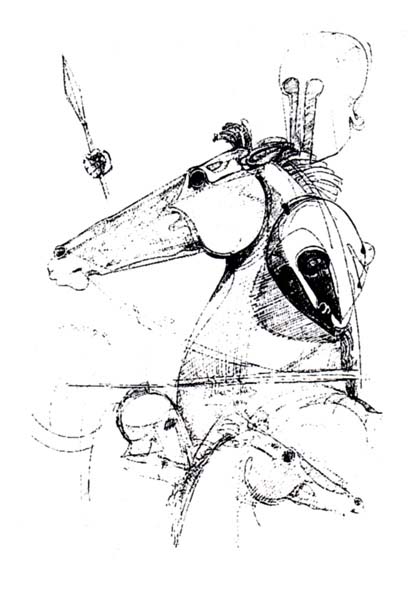 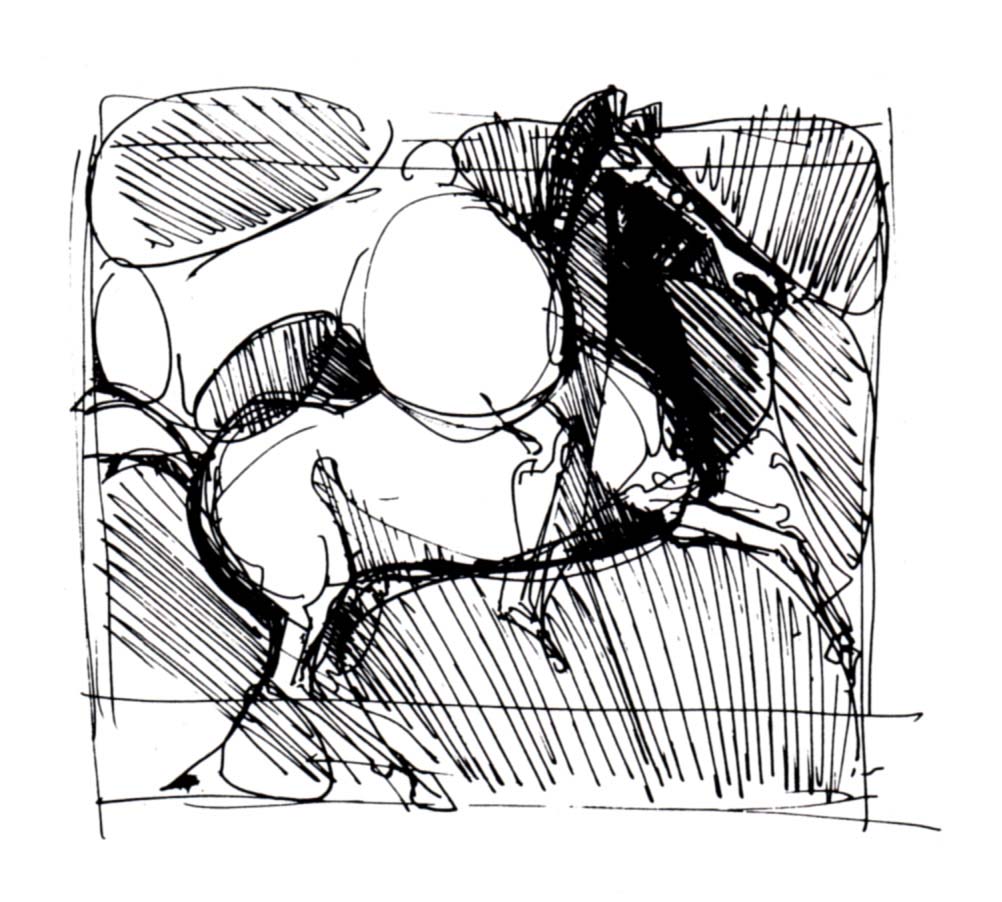 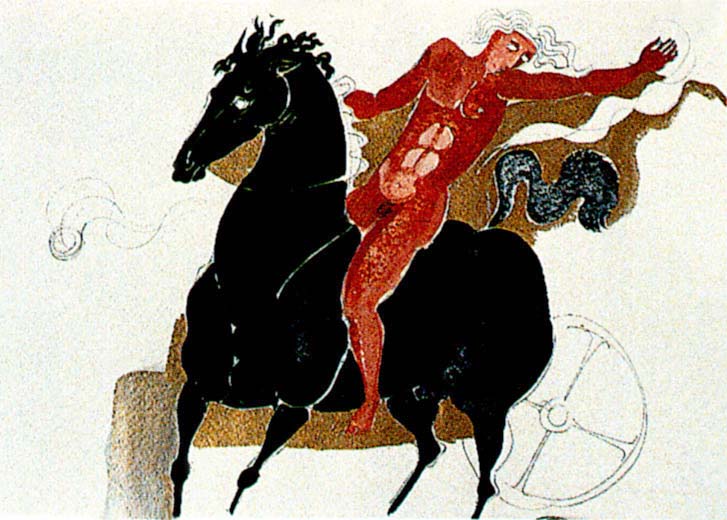 Study drawings, on the Alexander the Great theme

He produces the 'Alexander the Great' monument; the equestrian figure (6 meters high, 7 meters in breadth) and area (piazza) surrounding the monument (30x23x11m.) with sarissas and shields, and the relief showing the Battle of Issus (15m), which completes the whole composition of the place.

"Ever since I was a child, I had imagined Alexander the Great equestrian and dashing - a hero of myth! I had been preoccupied with the subject since 1960-61 without dreaming of any competition. The equestrian figure interests me because it provides great opportunities for composition. Thus, for the monument I designed a Sculpture Space.

I geometrized the forms on the equestrian figure so that they will withstand the test of time. I wanted a horse outside reality - a 'beast'. Alexander riding the rearing horse with ease, sitting as if on his throne, and that is what I was after in my final study. I wanted to depict him grand and imposing, dashing, and as if following a vision - these were the characteristics of Alexander the Great. He turns, holding his sword, a symbol with which he cut the Gordian Knot. 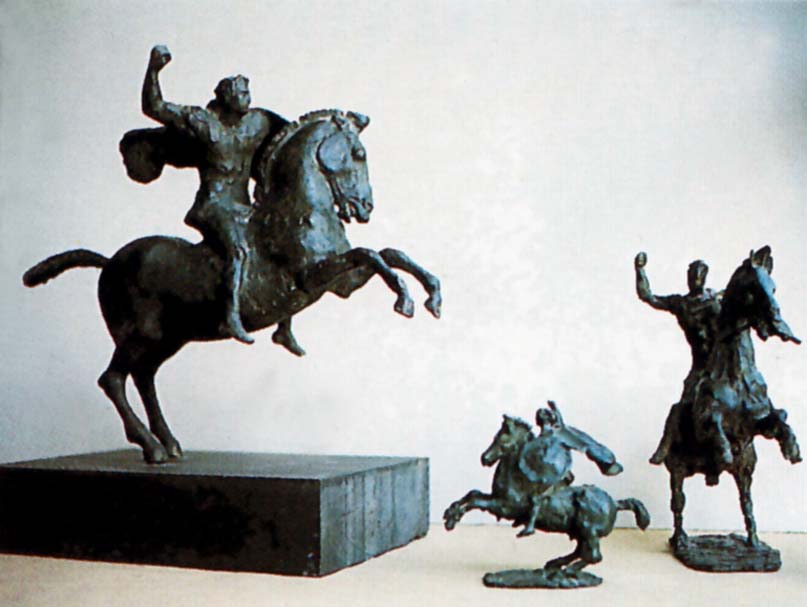 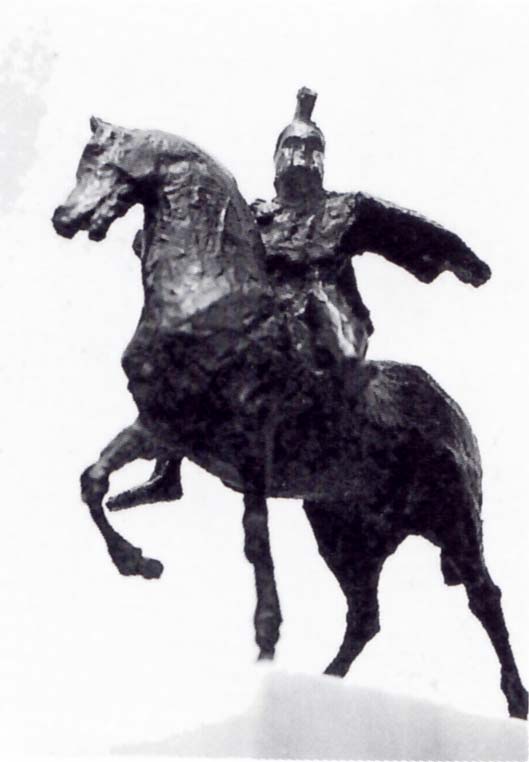 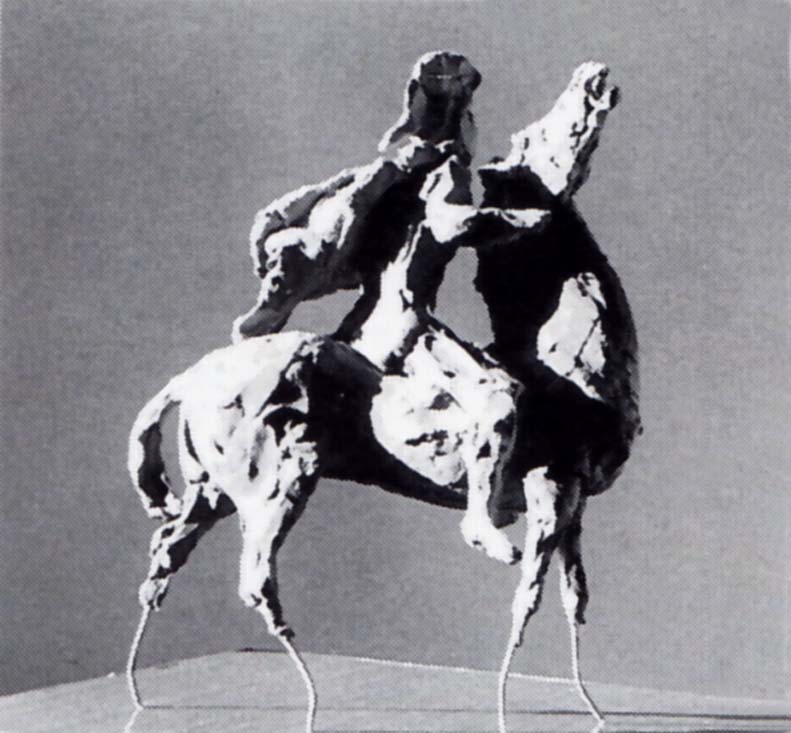 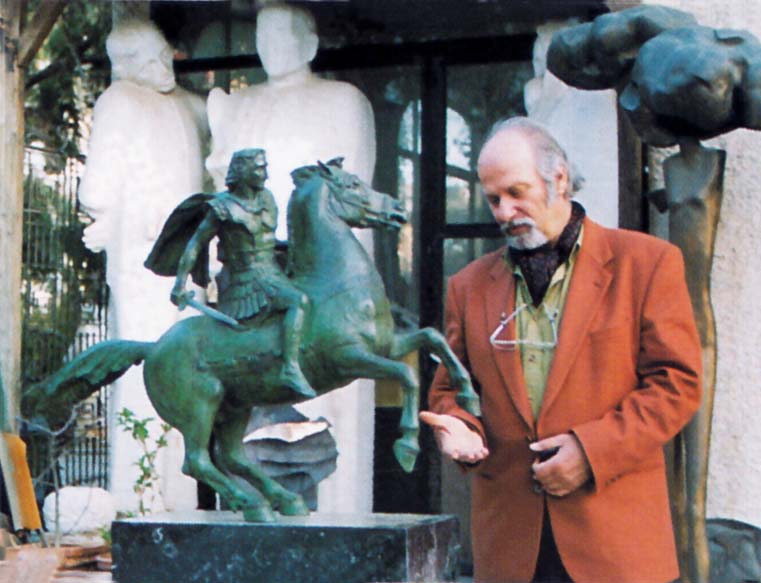 The equestrian figure is inscribed in a circle which rests on the rectangular parallelepiped marble base. It is a daring and difficult subject- a lot of studies were needed. The technical difficulties of its support were enormous. The centre of gravity had to be found. I'm interested in all the details: the horse's tail, its direction, the materials coming out from the armpit, the cape - a feature of great beauty, which interests me a lot and studied the centre of gravity at length so that it would have the right balance and the figure, weighing five tons, should weigh perfectly at the centre and almost hover! The static study was precise: each square metre of surface area can take 36 tons of wind pressure - let's not forget the Vandaris and the earthquakes which it has already withstood. 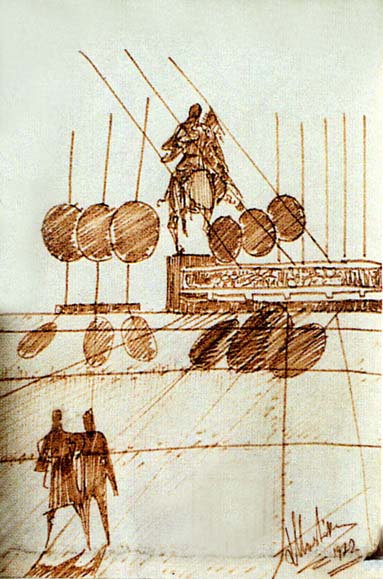 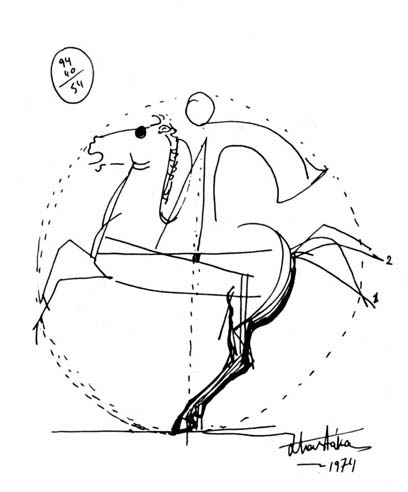 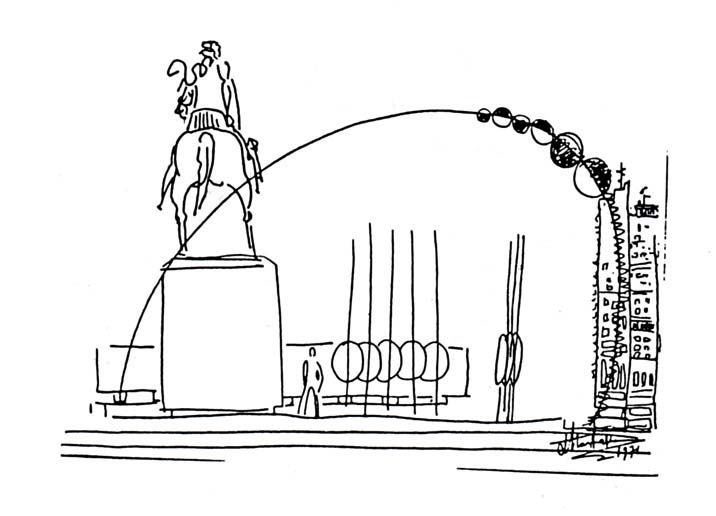 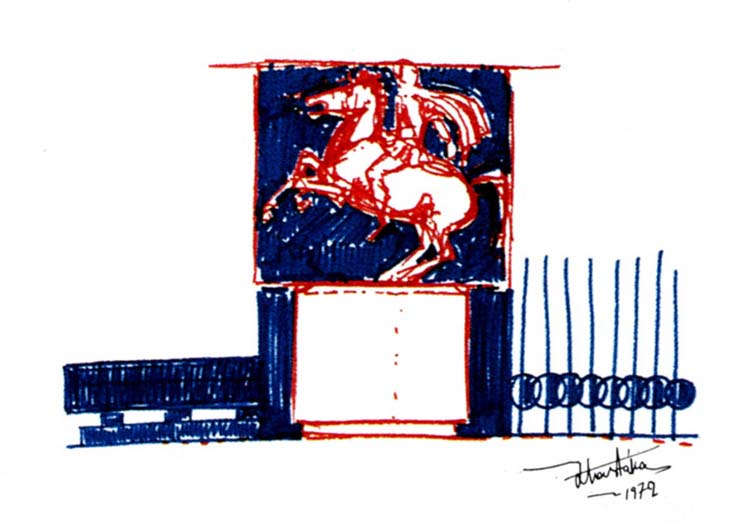 Drawings-Studies on Alexander the Great monument

What concerns and interests me is not only the equestrian figure, but also the things that frame the central feature: sarissas, shields, and their shadows. I want them to operate as mirages. I like the round parts of the shields in relation to the right-angled shapes, like the base and the piers on the pedestal. I wanted them to operate in a vertical manner, powered by the sun's trend and transform stillness into movement. The sarissas, together with the shield-circles, arranged in groups of five and three, the symbols of Medusa being engraved in relief - a snake, an eagle, a hawk, a bull. Indicative badges of the military corps of Alexander. 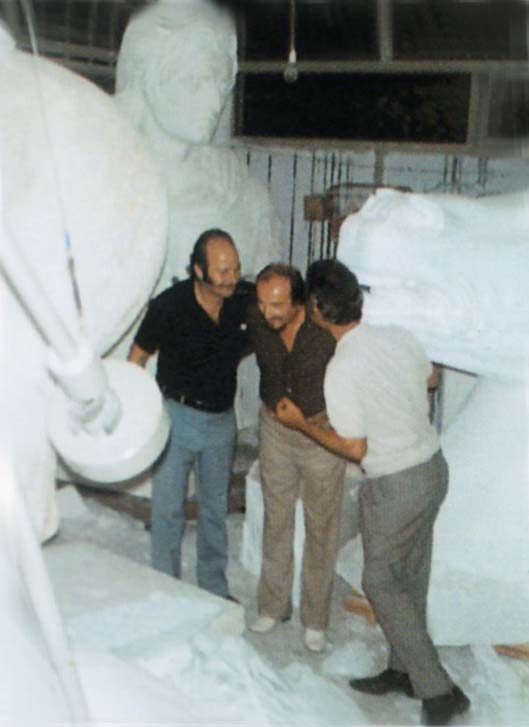 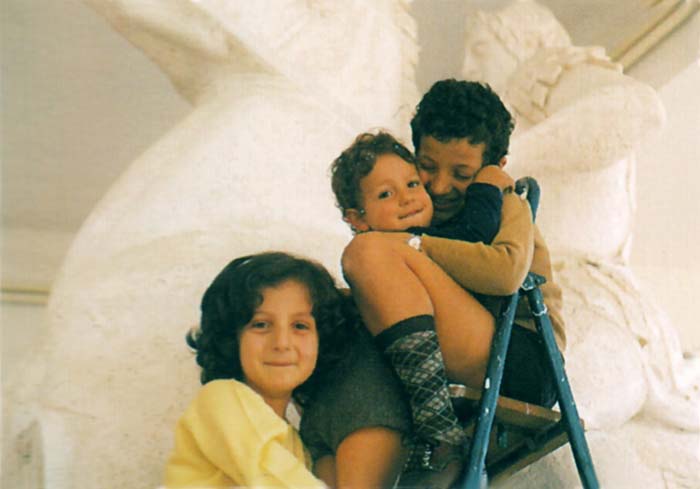 1. Among the models with the sculptors Christopoulos and Koutouratsas

2. Ioannis, Eleni and Alexandros on the working ladder

The Batlle of Issus. Relief in the area surrounding the monument - Thessaloniki - Bronze, 15.2m

The relief which completes the composition shows the most important battle fought by Alexander, the Battle of Issus that would determine his further conquests in Asia. 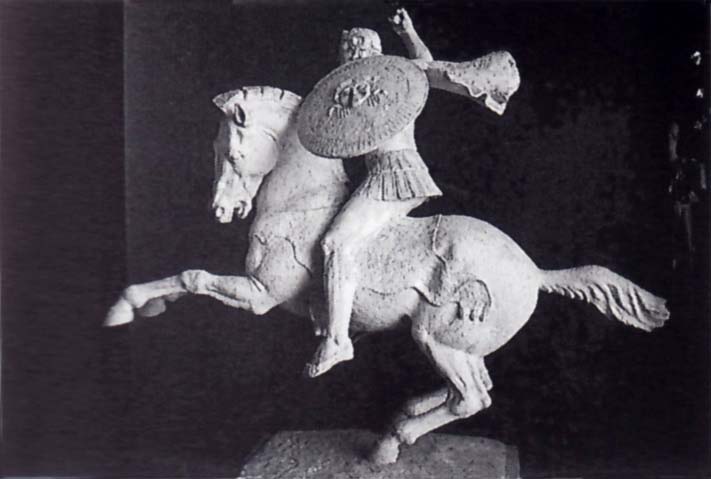 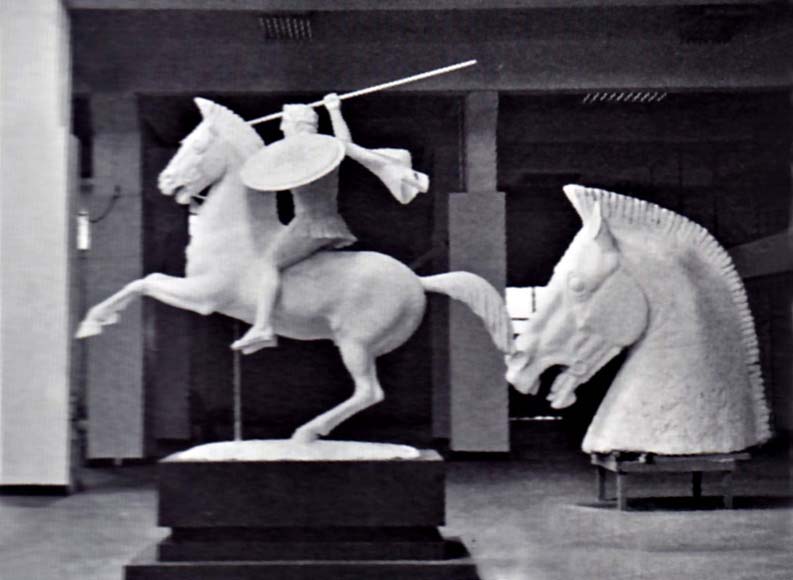 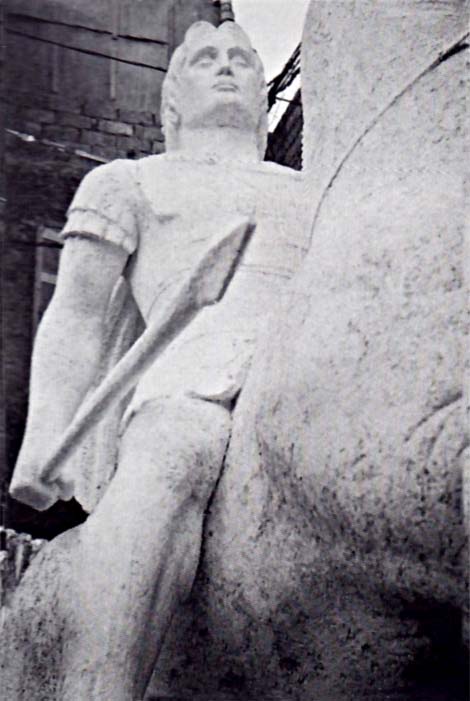 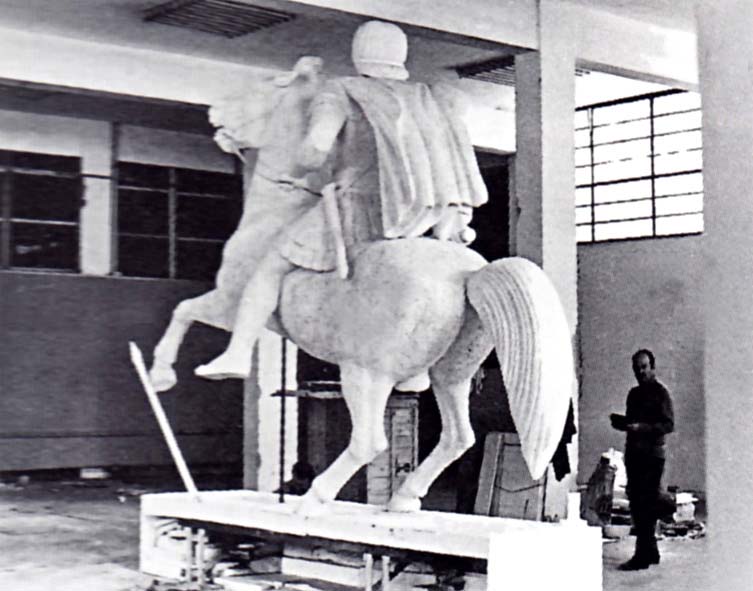 Aiming at the final solution, I tried out nine equestrian statues. The final statue was six metres high and seven metres long, while the previous one was four metres, the one before 2.50 metres, and the first one 1.25 - this was the artwork of the competition. Separately, there were others of smaller size. And just to give an idea of the actual size, I will mention that the head of Bucephalus is two meters long. For the final statue, I set up great masses of expanded polystyrene and used abstractive sculpture." 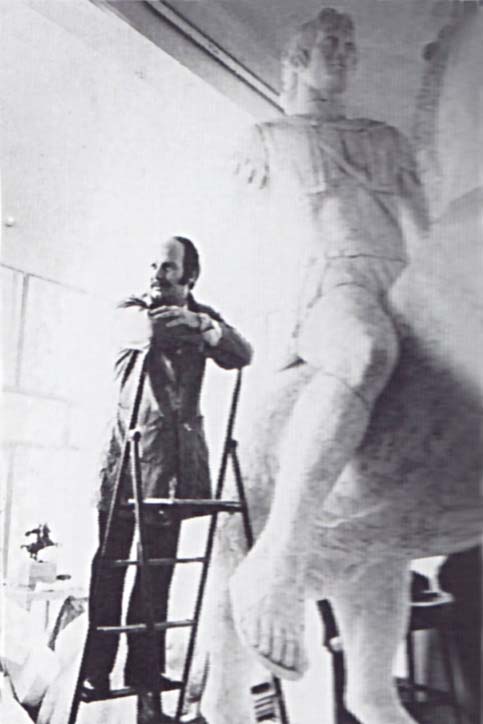 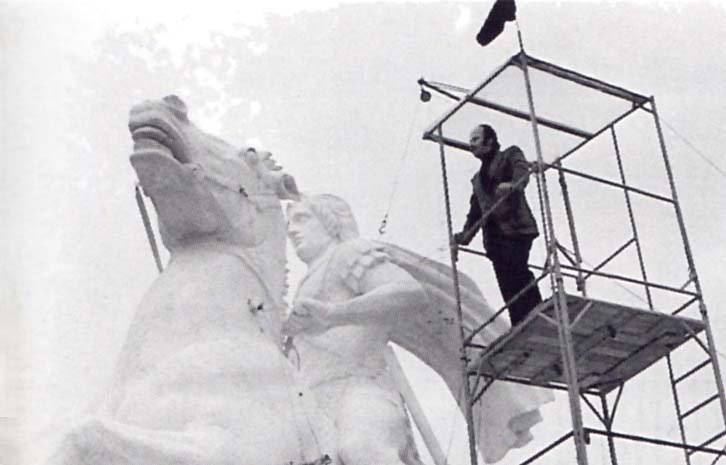 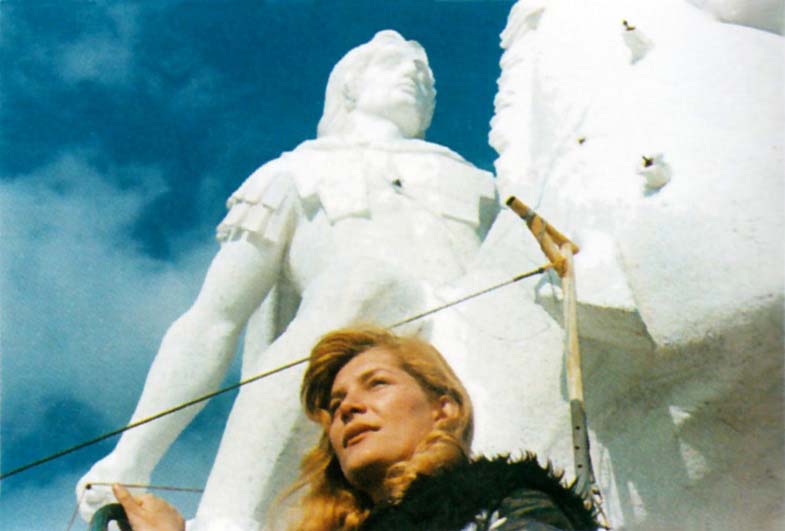 3. Aimilia Ipsilanti with the preform at Pallini 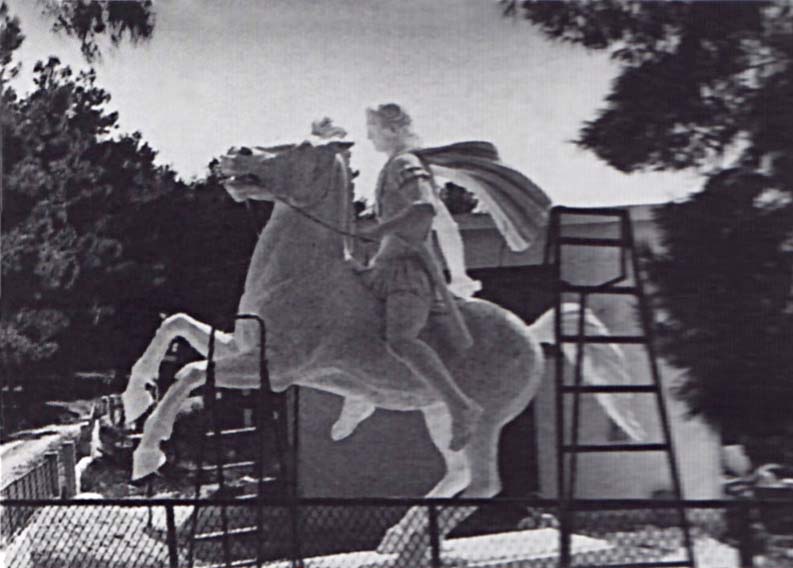 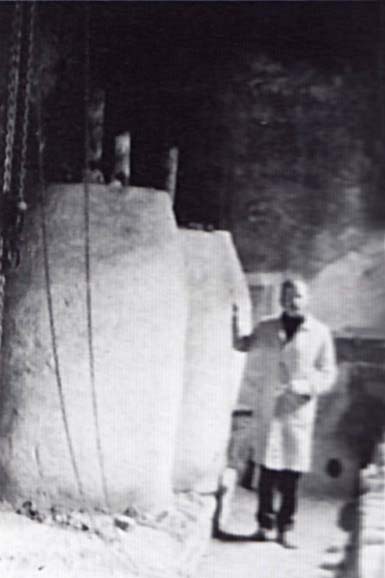 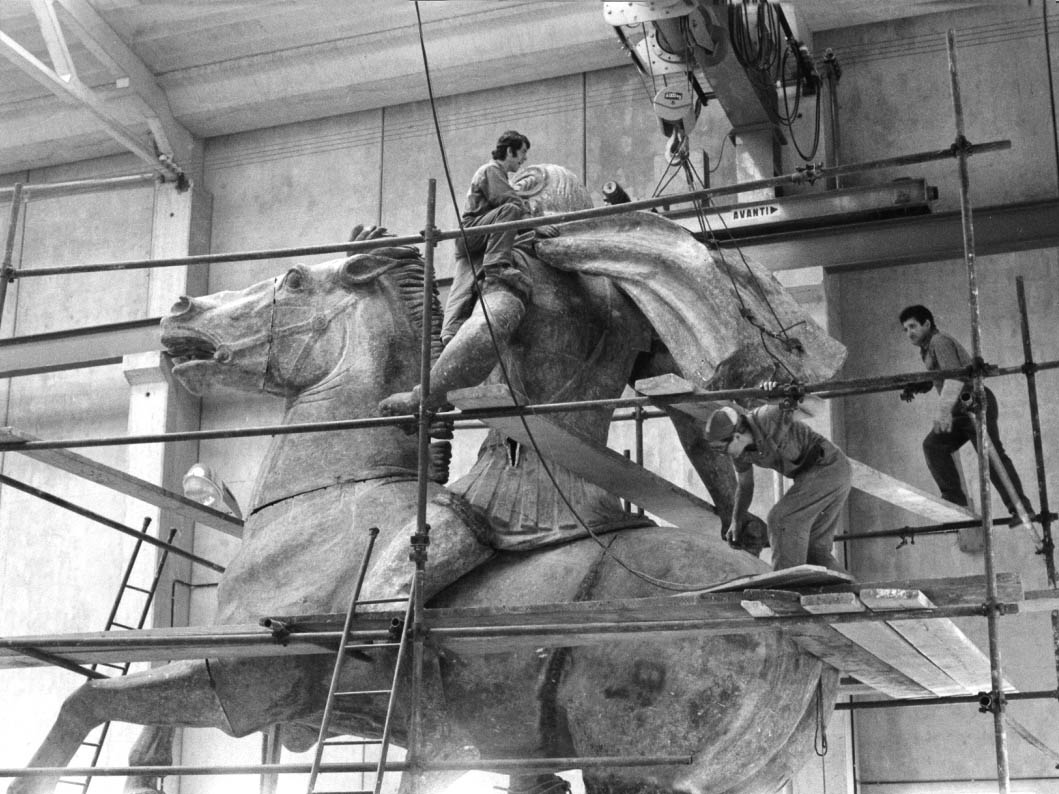 2. Moustakas at the foundry with the moulds for Alexander the Great

3. The equestrian in copper being welded. Its size is apparent as contrasted with the workers.